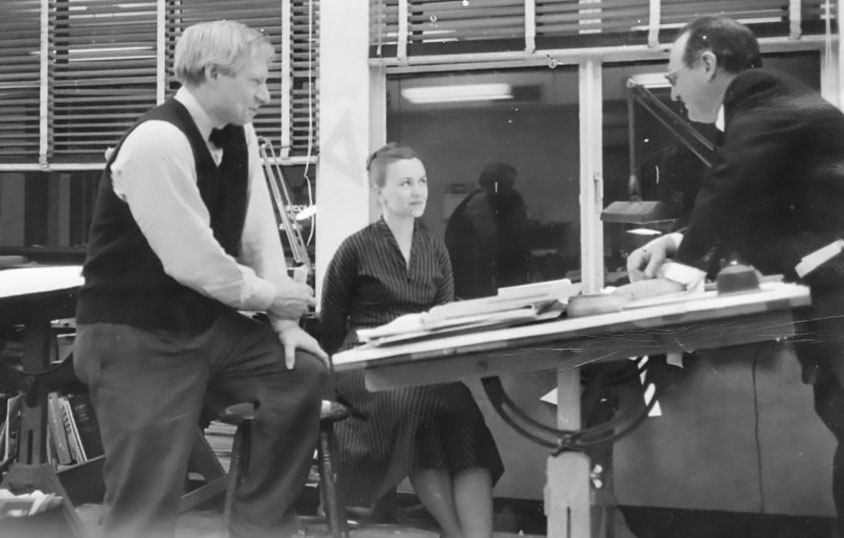 For the close of Women's History Month, I've profiled four female architects that may not have made it into our Architecture History courses. These women have each lived over 90 years and together span several decades of design. 1. Anne Tyng (1920 - 2011): Louis Kahn’s Muse Born in China in 1920, Anne Tyng was born to Episcopalian missionaries with an old New England bloodline. Anne was one of the first women to be admitted into the Harvard Graduate School of Design in 1942, where she studied under Walter Gropius, a master and pioneer of modern architecture. 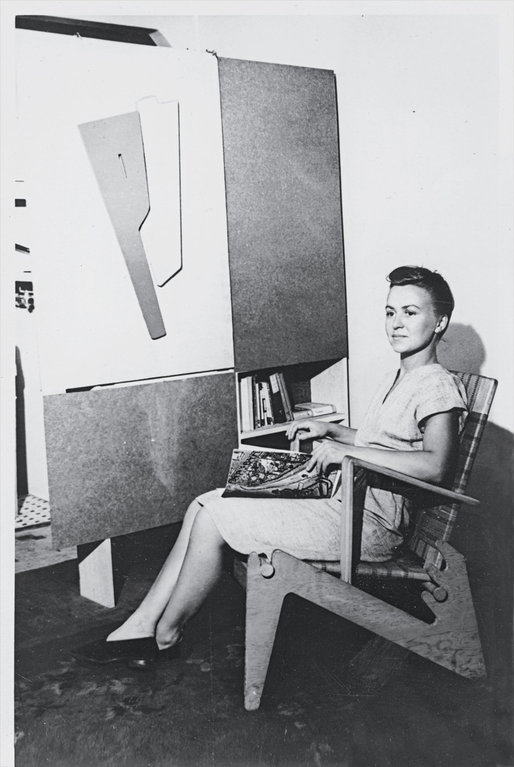 Anne moved to Philadelphia, impressed Louis Kahn, and joined his office, Stonorov & Kahn in 1945. She remained beside him when the firm split in 1947, and would later have a daughter with him after nine years of companionship / partnership. With a passion for geometry and organic forms, she heavily influenced Kahn’s work. She was often regarded as Kahn’s muse, although Bucky Fuller called her "Kahn's geometrical strategist." 2. Marion Mahony Griffin (1871-1961): Frank Lloyd Wright’s First Employee As a small girl, Marion Mahony Griffin, Chicago-born and raised (1871), witnessed the erased landscape of the Great Chicago Fire, and became fascinated with the suburban homes that would infill the void. In 1895, Frank Lloyd Wright hired Marion, a fresh MIT graduate (1894) as his very first employee; she was one of the first women in the world to have a license in architecture. She influenced the development of the Prairie style, which Frank Lloyd Wright is most known for. Marion’s elegant watercolors of buildings and landscapes became synonymous with Wright’s work, though never given credit.

When Wright eloped to Europe in 1909, he offered Marion all the studio’s commissions. She declined, and was then hired by Wright’s successor under the condition she would have control of design. Proving it is a small world, Marion married an ex-employee  of Wright’s, Walter Burley Griffin,  in 1911 to start a partnership that would last 28 years. 3. Eleanor Raymond (1887-1989): Solar House Innovator One client called Eleanor Raymond “an architect who combines a respect for tradition with a disrespect for its limitations.” She was born in Cambridge, MA,  and would later earn many commissions for homes in New England through her social circles. Eleanor first began work with Henry Atherton Frost, an advocate for clear, simple design. Eleanor brought this sentiment to her own practice in 1928, where she became a mover and shaker of residential design.  Eleanor designed one of the very first houses in the International Style (which was recently listed for sale in 2013), and continued to revolutionize residential design as an early adopter of "Adaptive-Re-Use". Her passion for historic preservation was gracefully balanced with the profound interest in new and innovative materials; she designed a Plywood House in 1940, and the Dover Sun House in 1948, the first occupied solar-powered house in the U.S.

4. Charlotte Perriand (1903-1999): Le Corbusier's Furniture Design Muscle After looking at her application, Le Corbusier told the 24 year old Parisienne furniture designer Charlotte Perriand in 1927, "We don't embroider cushions here". He changed his tune a few months later, once her work was on display at the Salon d'Automne, and then offered her a job. One year later, Charlotte ushered in the 'machine age' aesthetic to interiors, and designed the three most iconic chairs attributed to Le Corbusier. We still love (and replicate) them today: the B301  (Basculant Sling Chair), the B306 (The Chaise Lounge), and the LC2 Grand Comfort. 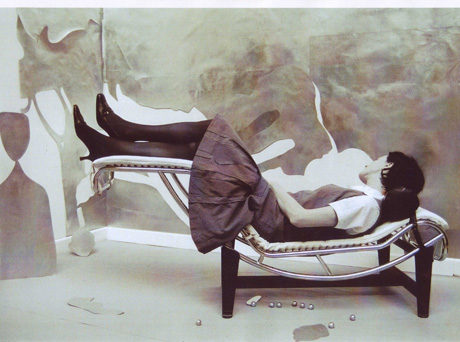 Charlotte in the famous Chaise Lounge Chair, via Henry-Moore.org

In the 1930s, Charlotte became involved in many leftist organizations, such as the Association des Écrivains et Artistes Révolutionnaires (AEAR) for revolutionary artists and writers, and later helped to found The Union des Artistes Modernes. All this instilled in her the value of producing affordable accessible design for the people. But the legacy-builders are not all in the past. The truth is, the momentum is still there for female rising-stars. They are starting their own firms, like Carrie Strickland. They are teaching and experimenting at schools of design, like Florencia Pita and Jacklin Hah Bloom.  This year's AIA National Convention in Chicago includes Architect and MacArthur “genius grant” winner Jeanne Gang, FAIA, founder of Studio Gang Architects as a featured keynote. AIA recently posthumously awarded the 2014 Gold Medal to Julia Morgan, FAIA, the first time their highest award has been bestowed upon a women. Women are even approaching the golden "50-50 mix" of female-to-male project teams, like Marianne Kwok. But the key word is "approaching". That 50-50 mix generally true in our architecture schools (think back to your college days), but yet only 18% of registered architects are female. This is exactly what initiatives such as AIA San Francisco's The Missing 32% Project, is investigating, the (slowly depleting, but still present) gender gap in the profession. But the open dialog around women in architecture is more vibrant now than ever before. From my own experience, it is exciting to see females in our own firm becoming registered, leading design teams, and being promoted! Some day, it will not be labeled as "conventionally male profession", but just plainly "the profession". 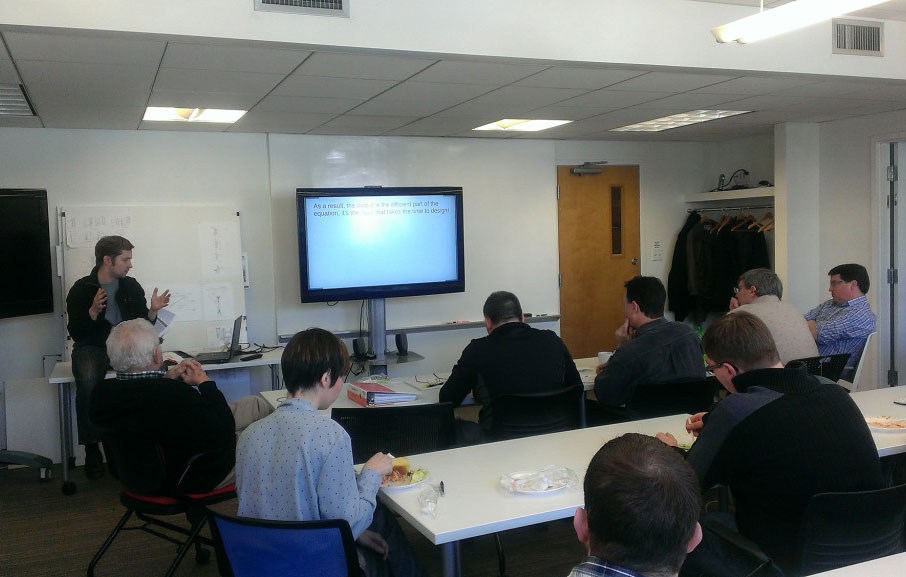 Last Friday I put together a small informal internal lunch and learn for the BPA staff in which we looked at and discussed digital fabrication equipment and construction techniques.  Based off of the course that I taught at Kent State University last semester, the discussion of various techniques and uses in architectural applications became very exciting.  We also began to discuss and share how the process of scripting and parametric design could impact our design.  I shared various precedent from firms such as SHoP Architects, design work by Alex Hogrefe, and even included some of my own work on a new bookshelf that is in process.  Feel free to walk through the Prezi Presentation below! 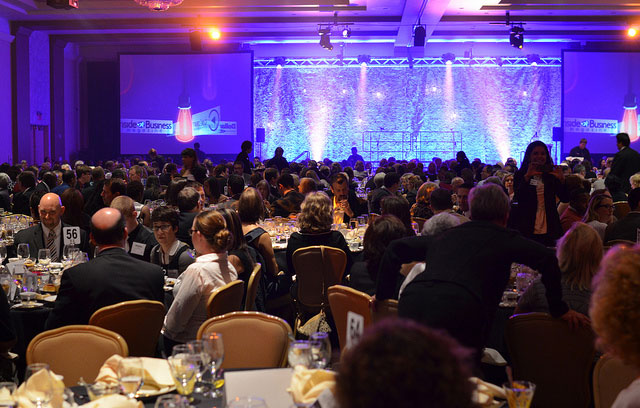 With close to 1,000 people in attendance, the Northcoast 99 awards dinner last night brought NE Ohio's best companies under one roof to celebrate as winners of the class of 2013. We went as first-time winners, and saw many of our clients, like Cuyahoga Community College and Lorain County Community College. While many jokes throughout the night poked fun at the legendary application process, multi-year winners assured us it gets easier the second year. Bialosky + Partners is a first time winner of the Northcoast 99 Award - hopefully the first of many years with some luck! Cleveland's own Singing Angels sent a surge of warmth through the crowd with their voices, and Craig Kielburger, co-founder of the international movement  Me to We earned his standing ovation with an inspiring speech that reminded us that change can start with one person, one community, one company. Craig Keilburger -who has built hundreds of schools and infrastructure for children and their families around the globe- speaks about the power just one person has to make a difference. Image from ERC.

All winners were awarded a lithograph for their accomplishments. Ours was proudly set up in our lobby this morning! Congrats to the fellow 98 winners! 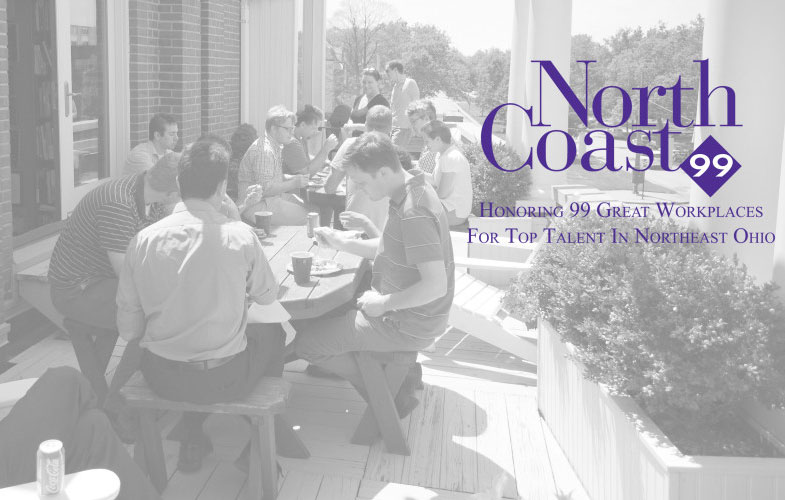 We were delighted to learn that Bialosky + Partners had been selected to receive a Northcoast 99 Award this year recognizing us as one of the best places to work in Northeast Ohio. It is further affirmation of what we have learned empirically: that our philosophy of work place empowerment and our culture of collaboration have succeeded in attracting and retaining extraordinary talent for our creative enterprise.   The Northcoast 99 committee discovered something in particular in our application that made Bialosky + Partners special.  Action Planning, the unique internally-driven workplace initiative in our firm, empowers 100 % of our employees to improve and energize our culture, workplace environment and resources, and professional development. A case study for this innovative process tells of its success in growing our firm, and the people within it. It has culminated in senior level advancement and the first ever intern-to-partner promotion in our 60 plus year history. We are very proud of “growing our own” and our clients tell us by their repeat business that they are very happy about it as well.   The business of architecture can be just that – a business. We’ve chosen another approach; we believe in a practice of inspiration and collaboration while balancing a client’s vision, project goals and design aspirations. While we lead with experience, we know the next great idea can come from anywhere, and often does. For our clients to believe in this, our employees have to believe it and live it first.  Anyone can “talk the talk”. It is very gratifying to receive recognition for doing our best to “walk the walk”. 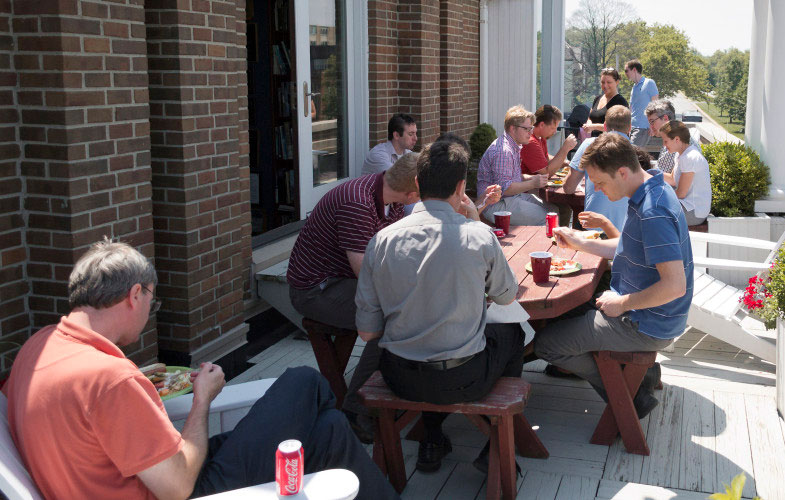 Its summer in Cleveland, as if you need reminding with this week's heatwave, and that of course means its time for our annual cookout. This year we were fortunate to have clear skies, a full spread of burgers, hot dogs, sides and desserts cooked by our very own. Not that we need much pressure to get out on the patio at lunch time, but it is always nice to have a good group gathered on the roof patio. New this year, was BPA Guess Who?, where employees submitted a baby photo and high school senior portrait photo. It goes without saying, hair styles have certainly changed for the better over the past few decades.