A half-century later, the design challenge is to transform 1000 Lakeside Avenue into a workplace that respects the original weightiness of brutalist design intent while introducing a light and airy environment with improved energy efficiencies that prioritize user flexibility, comfort and wellness.
Location Cleveland,OH 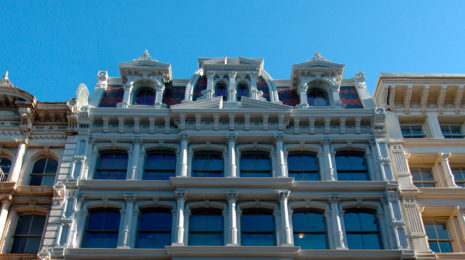 Queen of Greene
B Residence 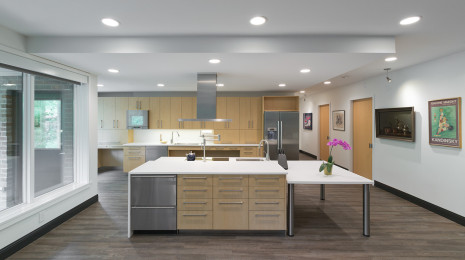 Designed in the 1960s by the New York based firm Harrison & Abramovitz, 1000 Lakeside Avenue exemplified the Brutalist architecture of the era. Atop a glassy base, two cantilevered upper stories clad in precast concrete panels seem to float above the street below. It stands as a raw minimalist building within I.M. Pei’s Erieview Masterplan that set to renew downtown Cleveland.

A half-century later, the design challenge is to transform 1000 Lakeside Avenue into a workplace that respects the original weightiness of brutalist design intent while introducing a light and airy environment with improved energy efficiencies that prioritize user flexibility, comfort and wellness. The solution is to embrace the paradigm of heavy over light by introducing more tension on the ground level through transparency, illumination, and materials.

In balancing openness and privacy, the new floor to ceiling glazing system employs portions of fritted glass that allows sunlight to penetrate spaces without interior activity being visible from the street. The north entry vestibule introduces a beautifully lit wood ceiling that pulls visitors through the lobby, which achieved further openness by removing a portion of the existing fire stair shaft wall—allowed via an innovative fire curtain and door system. The dark textured millwork of the ceiling and reception desk are contrasted with lightly textured floor tile and clean white walls adorned with the client’s noted modern art collection. Complementing this lightweight pallet, the existing central elevator shaft was re-clad in white marble and re-envisioned as a minimalist sculptural visual anchor. Beautiful wood-clad partitions stop short of the tall ceilings with a nearly invisible line of glass that holds back private conversations while allowing light to flow freely between the spaces. Elegant fixtures are suspended throughout most of the ground floor with direct/indirect diffused lighting that, from the inside, celebrates the clean, sparse nature of the spaces while, from the outside, makes the heavy upper portion of the building appear weightless.

While the renovations focused namely on the ground floor, the future of 1000 Lakeside Avenue predicts using the ground floor as a template for additional renovations to the upper levels of offices via the transferable and timeless design language set in phase one.