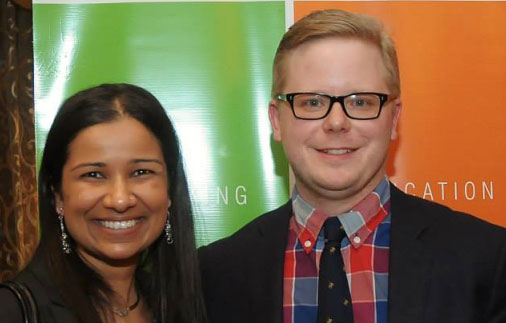 Bialosky + Partners is very proud to announce that both Jill Christoff and Ted Ferringer have been awarded the 2014 Northeast Ohio Top 25 Under 35 Movers & Shakers Award by the Cleveland Professional 20/30 Club.  At a reception last month, Jill and Ted were recognized for their efforts in the office as well as in the civic and philanthropic realms.  The 20/30 Club is the largest and longest-running young professional group in Northeast Ohio and has recognized over 200 young professionals with this award over the last 8 years.  "Every year, the recipients and their contributions are more impressive and inspiring than the last year.  We're proud to bring this diverse and deserving group together to honor their achievements and help connect YPs and others with the region's current and future leaders," said Lindsey Polichuck, President of the Cleveland Professional 20/30 Club of this year's entire class of recipients.   After graduating with her Master's in Architecture from Notre Dame University in 2009, Jill began to reinvest herself in Cleveland; actively involving herself wherever she believed in the mission of the organization and where she could make an impact.  Over the last few years, she has been consistently involved in volunteering with the AIA Cleveland chapter, organizing various lectures, tours, and developing programming for other young professionals and was awarded with the Emerging Practitioner Award this past year.  She has volunteered for PechaKucha since 2008, involving herself in almost every aspect of production of these popular events including fundraising, marketing, and photo-documenting.  Jill has been teaching an Interior Design studio at Kent State University's CAED for the past few years, helping students learn necessary skills for the profession as well as mentoring them and helping lead them into the professional world.  Jill has volunteered her time after hours to help organize Bialosky + Partner's CANstruction efforts for the past few years, raising over $10,000 in canned food donated to the Greater Cleveland Foodbank in the last two years alone.   Ted is an active member of the community and actively volunteers his time supporting a number of local and regional causes.  He is a founding member of the Edgewater Hill Victory Garden community garden, Bike Cleveland Advocacy Committee Member, and co-lead planner of Park (ing) Day Cleveland, an annual open-source global event in which citizens, artists, and activists collaborate to temporarily transform metered parking spaces into temporary public places.  Ted has served locally with AIA Cleveland as co-chair of the Associates committee and the Director of Community Outreach, resulting in his Activism Award at this past year's AIA Cleveland Design Awards.  He is currently the Regional Associate Director for the entire Ohio Valley Region serving on the National Associates Committee.  Ted has volunteered his time to help Bialosky + Partners earn Honorable Mention in the COLDSCAPES competition with the submission "GLOW" and pro bono work for Bike Cleveland, leading planning and design for "The Midway", a conceptual proposal for a separated cycle track network in Cleveland that re-uses right-of-ways from the city's former streetcar network.   We are very proud of all the work that Jill and Ted have done, both to serve our clients and to serve our community! [slideshow_deploy id='2703']