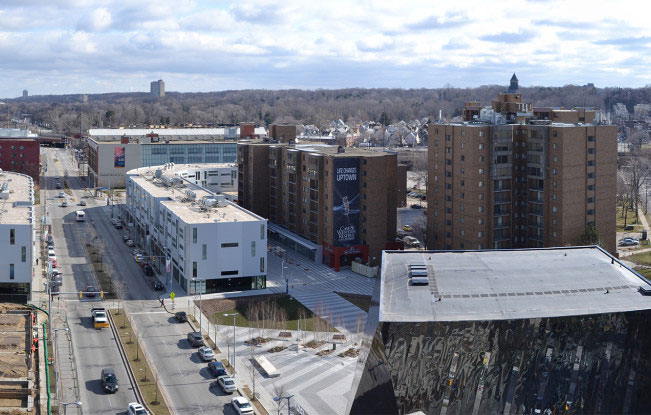 Via their involvement with AIA Cleveland, Jill Christoff and Matt MacRaild of Bialosky + Partners recently organized a tour of University Circle that focused on Uptown Cleveland, designed by Stanley Saitowitz of Natoma Architects. Landscape design is by Field Operations, the designers of the High Line in New York City, who are also working on designs to re-imagine Public Square in downtown Cleveland. The tour, a collaboration between the AIA Cleveland Associates Committee and Urban Design Committees was a part of the Building Cleveland To Scale: S, M, L, XL tour series. Phase 1 of the project features $44 million of new construction, with new buildings on the north and south sides of Euclid Ave, between Ford Rd / Mayfield Rd and East 115th St, and multiple renovated 1970s vintage apartment buildings on the south side of the street. The project includes almost 60,000 sf of retail, and 114 new market rate apartments in the first phase. Phase 2, estimated at $21 million,  is currently under construction and contains 43 market rate apartments and housing for around 110 Cleveland Institute of Art students, with first floor retail. The tour was split into two halves: In the second portion of the tour, Ari Maron of MRN, Ltd., tells attendees the story of the development of Uptown under the shadow of Phase 2 of Uptown in the background.

Previous tours have featured the St. Luke's Hospital re-development in the Shaker-Buckeye neighborhood of Cleveland, the Farshid Moussavi designed MOCA Cleveland, the Cleveland Convention Center and Global Center for Health Innovation, a rehabilitation and renovation project to the Celebrezze Federal Tower, and The Transformer Station art gallery in Ohio City. If you're interested in staying abreast of upcoming AIA Cleveland events - sign up for their weekly email here!