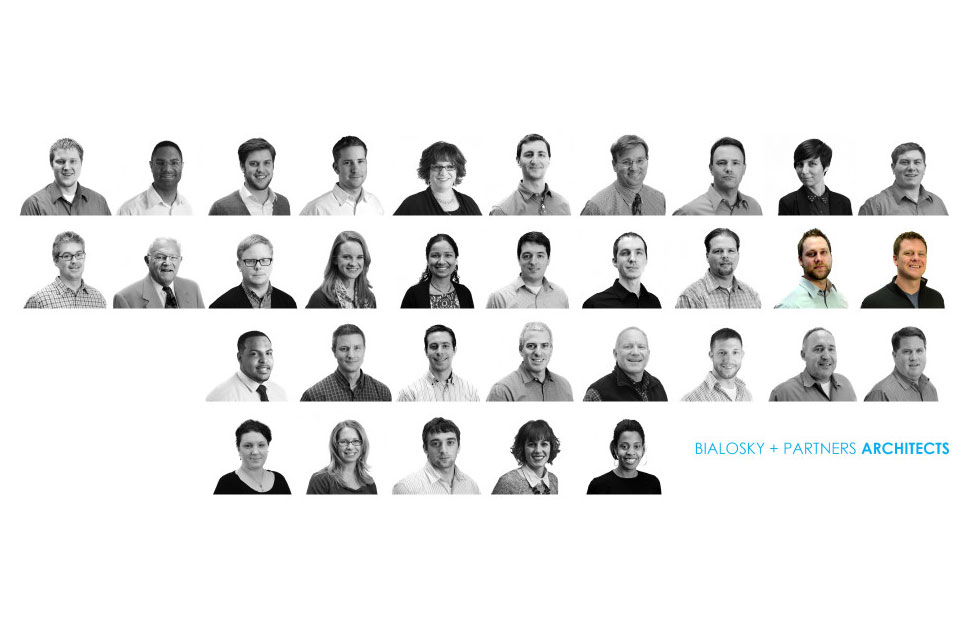 As a continuation of the celebration of our recent promotions, Bialosky + Partners Architects is proud to announce Paul Taylor and Brandon Garrett have both been promoted to Associate Principals.

Paul Taylor joined the Bialosky + Partners Architects team in 1998 after earning his BArch from Kent State University.  As a designer, Paul has worked on numerous award winning projects including a private residence  Pura Vida, Cuyahoga Community College Hospitality Management Center.  More recently, he has been working on Ursuline College Center for Creative and Healing Arts and currently on his drawing board is a plan to redevelop the Cuyahoga County Community College Metro Campus’s Campus Center. Over the past few years Paul has shown a true interest in sustainability with a particular focus on the science behind developing an efficient building envelope.  To support his interest in this field, he is actively involved in Cleveland’s Building Enclosure Council.  Paul’s recommendation to those in the field is to read any book about designing environmentally sensitive and low energy-usage structures.  John Straube’s High Performance Enclosures or Joseph Lstiburek’s Builder’s Guide to… series are a great place to start.

Not only is Paul active in many projects and tasks within the office, he is also an involved member of the design community.   Along with his activity in the Building Enclosure council, he has served as a member of the Shaker Square Historic Design Review Committee for the last 8 years.  Paul has also volunteered his talents and design skills to support his church’s building and grounds master planning efforts.  In addition to these volunteer efforts, Paul and his wife, Sarah, are currently in the process of designing their own home. Paul has been able to check off 57 of Cleveland Scene’s top 100 things to do before you die.  If he was able to take us on a Cleveland based field trip, he’d wait until the spring and take us to Lakeview Cemetery.  He says, “The grounds are absolutely amazing!  It is as much an arboretum, park, horticultural garden, and sanctuary as it is a cemetery.  The design of the mausoleums and monuments are stunning and rich with stories; coupled with the spring growth and flowering trees it is a day to remember.”  His favorite place or space is actually standing on top of a mountain, with his skis pointed downhill, ready for a great run!

Brandon Garrett joined Bialosky + Partners in 2001 and immediately became involved with the day-to-day activities of the firm.  As a designer with a Bachelor of Science in Architectural Engineering Technology from the University of Cincinnati (class of 1998), Brandon prides himself on his work ethic and attention to detail.  These traits along with his management skills have been instrumental in developing projects such as the Walter K. Chess Center at Muskingum University, Crocker Park’s first phase, and 200 Lafayette. Brandon continues to excel as a leader and designer in the office.  He is currently overseeing the construction process for BPA’s most recent project at Muskingum, the University Center.  To understand the field as he does, Brandon would suggest Materials for Design by Victoria Ballard Bell & Patrick Rand.  The understanding of both material properties and the way in which they tectonically are assembled allow Brandon the ability to design amazingly beautiful details.

When not working in the office, you can run into Brandon at almost any Cleveland sporting event.  He’s such a big fan of the local teams that has recently accepted the challenge of bringing a winner to the area and undertaken the role as coach for a YMCA 5-6 year old Jr. Cavs basketball team.  If he’s not supporting the teams on the field, he is busy supporting teams of local charities including the Alzheimer’s Association. Brandon has been able to check off 68 items off of his bucket list of Scene’s top 100.  While Brandon’s favorite place is Interlaken, Switzerland, if he were to take us around the city of Cleveland, he’d give us a taste of Ohio City.  “Being a past resident of Ohio City for many years, we’d tour the OC.  Highlights would include a tour of Great Lakes Brewery (includes a pint or four), the West Side Market, a walk up Jay St., Bridge Ave. and West 25th St. Dinner at Momocho.” Congratulations again to both Brandon and Paul for their well-deserved promotion.  We look forward to continued success for you both!