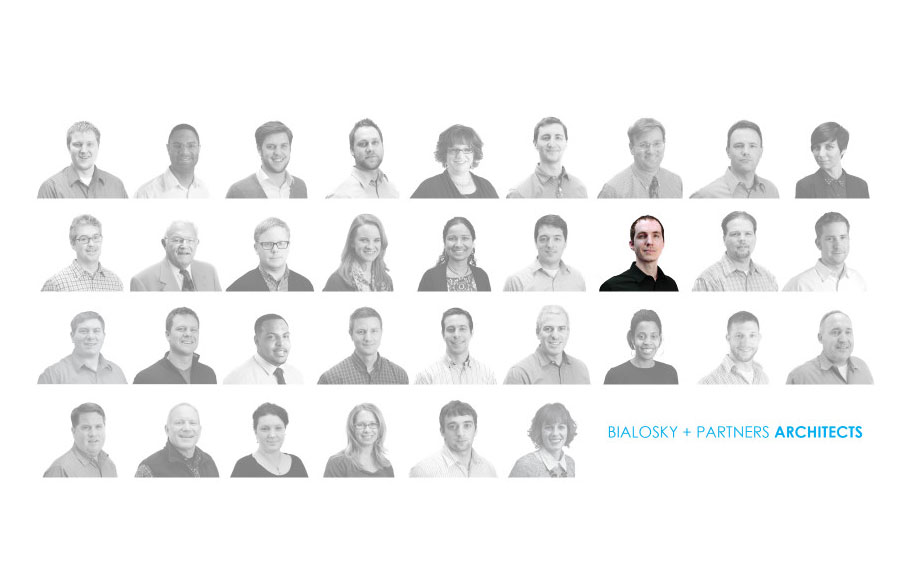 We have one final promotion to announce at Bialosky + Partners Architects: David W. Craun, AIA, and LEED AP has been promoted to Principal. Congratulations David!

David has been recently named as one of Engineering News Record’s Top 20 Under 40 (Midwest Region, c/o ‘14) as a mover and shaker in the industry. David’s well rounded experience as an architect includes a holistic understanding of access, connectivity and interaction of mixed and multi-use facilities due to his training and practice as an urban designer. David W. Craun is a registered architect in the state of Ohio, and a LEED AP Certified Professional. His professional affiliations include AIA, NCARB, USGBC, ULI, APA and KSU’s CAED.

David was the design lead for the Ben & Jane Norton Culinary and Convergent Digital Arts at Lorain County Community College, which recently won an Honorable Mention at the 2013 AIA Cleveland Design Awards. He has also led firm planning and design efforts for Crocker Park, the highly acclaimed 4,000,000 square foot mixed use center that has become a national model for New Urbanist development. Pushing the firm to enter design competitions, David has led many of them with great successes. This includes INTESA, the major development of the last vacant parcel in Cleveland’s prestigious University Circle, COLDSCAPES (Honorable Mention) as well as Bialosky + Partners' collaboration with Architecture Research Office on a joint effort for the new facility for the Kent State University College of Architecture and Environmental Design (CAED) international competition (Finalist).

In his decade-long relationship with Zygote Press, the Cleveland-based non-profit print shop and gallery, David has volunteered his architectural services for the organization’s new studio spaces – a tall order that encompassed space-planning for large equipment and also fluctuating volunteers, interns, and staff. The current pro-bono project with Zygote is called “Ink House”. Located in the Waterloo Arts District, David will be the design lead on transforming an empty house into center for printmaking production and artist residence as a part of a grander plan of neighborhood revitalization.

Zygote Press' new Ink House, slated to open this summer, is being re-imagined by David as a screen printing center for the non-profit.

David retains a strong relationship with his alma mater, Kent State University (MArch c/o ’03), where he was an Adjunct Instructor for six years. While enthusiastically and holistically coaching undergraduates in design studios, David taught not just to help students solve the immediate puzzles of their projects, but to instill technique, creative thinking, and confidence for young designers at the university. David has kept a relationship with many of his former students throughout the decade, even launched their professional careers working beside him as co-workers at Bialosky + Partners. As principal, David joins existing Bialosky + Partners Architects principals Jack Bialosky Jr., Paul Deutsch, Bruce Horton, and Mark Olson in leading one of the Midwest’s most successful architecture, planning, and design firms.