The Road to VR: Our Office’s Leap into Virtual Reality 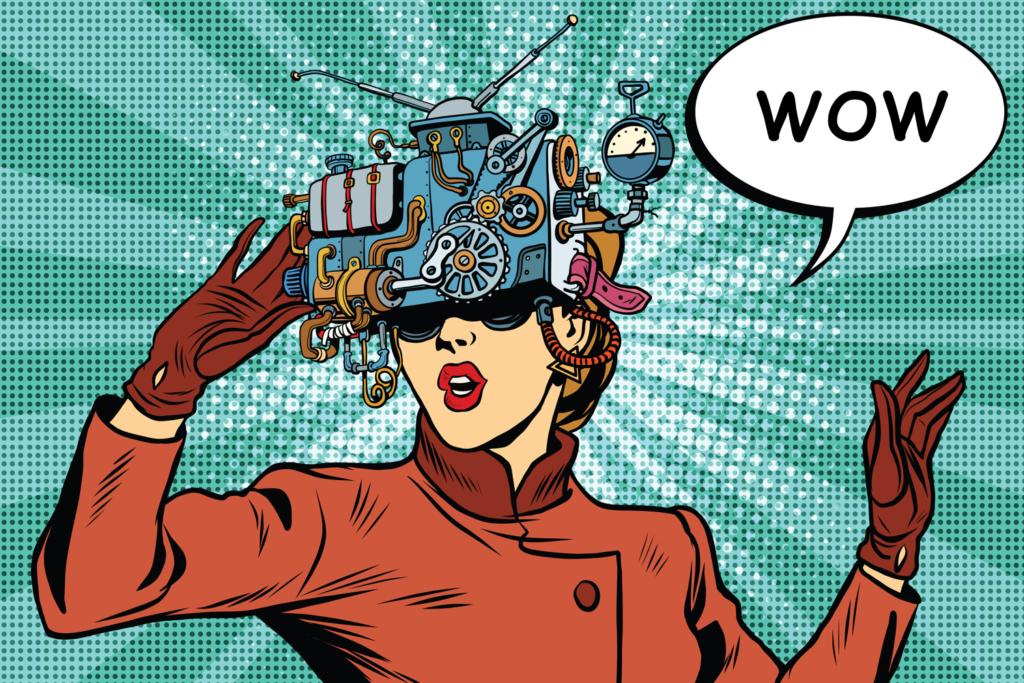 A Brief History of Virtual Reality

Virtual Reality (VR) has been a long fascination of “techies” for decades. It began in the 1950’s with the “sensorama”. Marketed as “the cinema of the future”, it incorporated multisensory elements such as aromas, body tilting, projection of 3D imagery, and wind bursts. Falling short of its romanticized goals, the interest was largely forgotten by the public for decades.  In 1985, NASA adapted a helmet for astronauts to control robots and mechanisms outside the space station, which mitigated the hazards of the physical environs, such as radiation, space debris, and being set adrift. This innovation, called the VVED (Virtual Visual Environment Display), successfully emulated a 360 degree environment. Again, the innovation largely fell by the wayside until 2011. As cell phones became increasingly more powerful, more avenues of mobility and technology converged, which opened new (or rather old) doors of creativity. Enter the iPhone Virtual Reality Viewer. When this consumer-friendly product came to market, it re-ignited a VR craze for a third time. The popularity of cell phone viewers encouraged large corporations such as HTC, Oculus/Facebook, and PlayStation to invest serious capital into developing affordable, widely accessible systems (ensuring the technology was here to stay). Today, Virtual Reality has broad applications beyond entertainment and gaming; it has become an invaluable resource for industries such as healthcare, education, the military, and architecture. 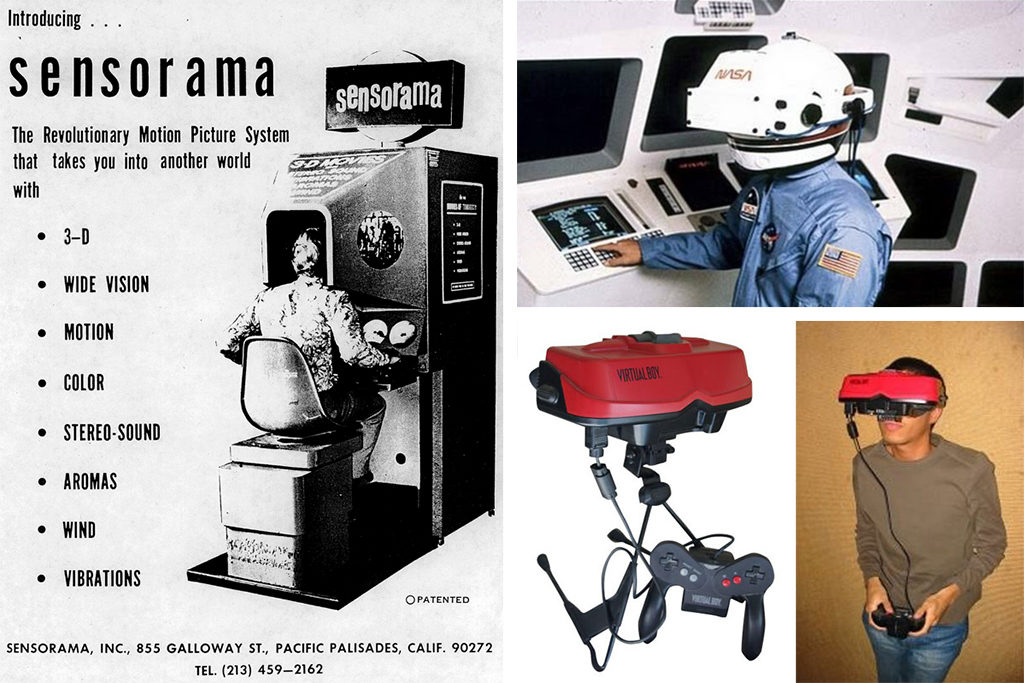 Investigating VR Hardware for our Office

When our office committed to investing in a VR system, we committed hours of research and testing for the most immersive experience possible. After exhaustive research, our office established that portability, power, and expandability were the primary priorities.

As a response to portability, an Alienware 15 laptop was selected. The critical spec include the following; i7-7820HK processor, 16GB DDR4 @2667 MHZ of ram, 512 SSD(boot drive) + 1TB SATA, NVIDIA GeForce GTX 1070 w/ 8 GB GDDR5 graphics card. We concluded that this was not only the most powerful initial build, but also the most scalable model; Alienware’s build philosophy allows for expandable computers and even provides diagrams for do-it-yourself upgrading. In our experience, the concept has been successful and still allows us to anticipate evolutions in the technology as it becomes more developed and sophisticated.

The VR hardware we chose was the Oculus headset with Oculus Touch controllers and three room-bounding sensors. Being more compact than their competitors and having their center of gravity around your hands (as opposed to in front of the users hands), the Oculus Touch allows the controllers to disappear while within the VR environment. The button locations and angles are also ergonomically based to produce the same result. Most importantly, high-use button controls are exactly where you expect and want them to be. In contrast, the menu buttons are designed to be out of the way, so they are only accessed with intention, not by accident. For the full emersion to be believed, the experience needed to be intuitive and mitigate factors that could dissolve the illusion, such as buttons being unintentionally pressed. Ideally, the goal of Virtual Reality is that the device itself should become the invisible framework, allowing creativity (or fun) to occur unabated.  With all these considerations, The Oculus became the obvious choice and has since been reinforced after their announcement that a wireless headset is in development.

We also have chosen to connect most of the assembly into the “Dell DisplayLink 4k Plug and Play”. This allows multiple USB 2.0 and USB 3.0 connections WITHOUT loss of signal or downgrading the signal. The added benefit is having a consolidated and cleaner setup. The displaylink also allows us to project onto a screen and/or mobile TV display in order to enhance communication to those outside of the head set. We chose our software based on seamless integration into our current workflow and quality of the output. As secondary criterion, it needed to have an intuitive interface, both in the VR environment and the software’s user interface itself. The first software chosen as our platform was intended to be the icebreaker for the firm and allow everyone to easily understand how critical it was to start our entry and participation into this community.

An important dimension of adopting VR into the office was designating and equipping appropriate areas to use it. A permanent VR workspace was established in our office, as well as a portable workspace, which allows designers to bring the device to clients, interviews, and even home to develop projects/ideas at their leisure (or as necessary). 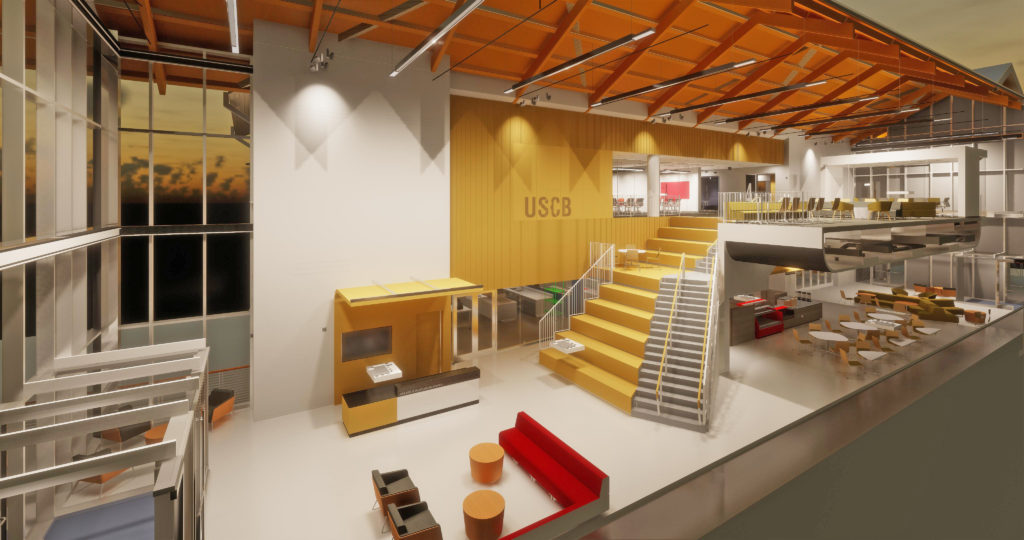 Virtual Reality has the ability to solve many of our contemporary problems. How do we streamline our workflow? Can this workflow incorporate 3D visuals? How do we not duplicate work to produce a rendering? Can the rendering communicate back to our initial “production” models? How can we have more productive meetings with clients? Do they accurately understand our concepts? These are just a few of the many questions the current VR technology/software has started to answer.

Informing the Design Process: Between Architect and Architect

Design is ever changing, and as a building evolves, it is a daunting task to catch and fully develop every possible detail which could arise. Virtual Reality is a quick way to actually jump into the drawings and see what hasn’t been developed, what is missing, and what hasn’t even been thought of yet. This is all possible with the pairing of Revit and Enscape through the eyes of the Oculus Rift. It is also a great platform to ensure an idea will have the intended result, without having to wait until experiencing the built product. We can become fully immersed within the new idea moments after its conception and determine if it is the best direction for the project… and most importantly, still during design.

Revit isn’t a new software by industry standards, but Bialosky Cleveland is beginning to unlock its true potential. By enhancing Revit and creating a Virtual Reality experience, project teams can walk through their project in its infancy and easily spot potential trouble areas and conditions. Enscape allows for the team to discuss an issue, create several solutions to the problem, and even switch between these results quickly to make a decision all within a matter of minutes. 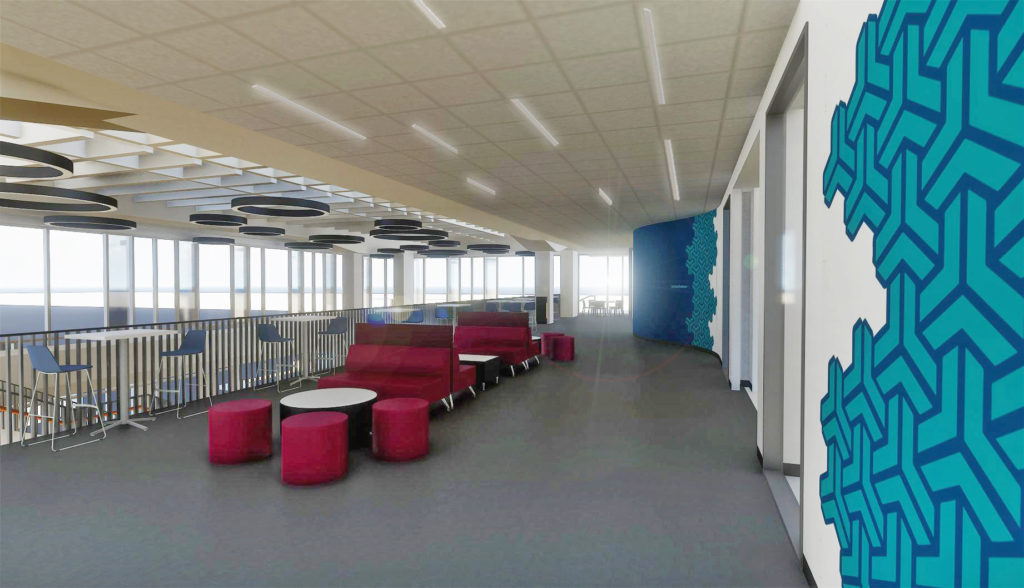 Informing the Design Process: Between Architect and Consultant

It is imperative during the design phase of a project that all members of the team coordinate their respective responsibilities in order to create a beautiful, functional end result. Virtual Reality is a quick and effective way to enhance this collaboration. When each discipline produces their drawings in Revit, Virtual Reality is able to efficiently show where conflicts arise. Coordinating the puzzle above the ceiling grid takes a lot of time and attention to detail but imagine being in the ceiling and seeing all of the mechanical and plumbing in front of your eyes. This is possible with Virtual Reality and again, allows for quick solutions. We hope to further integrate this technology to all in-house disciplines to assist in coordination meetings. 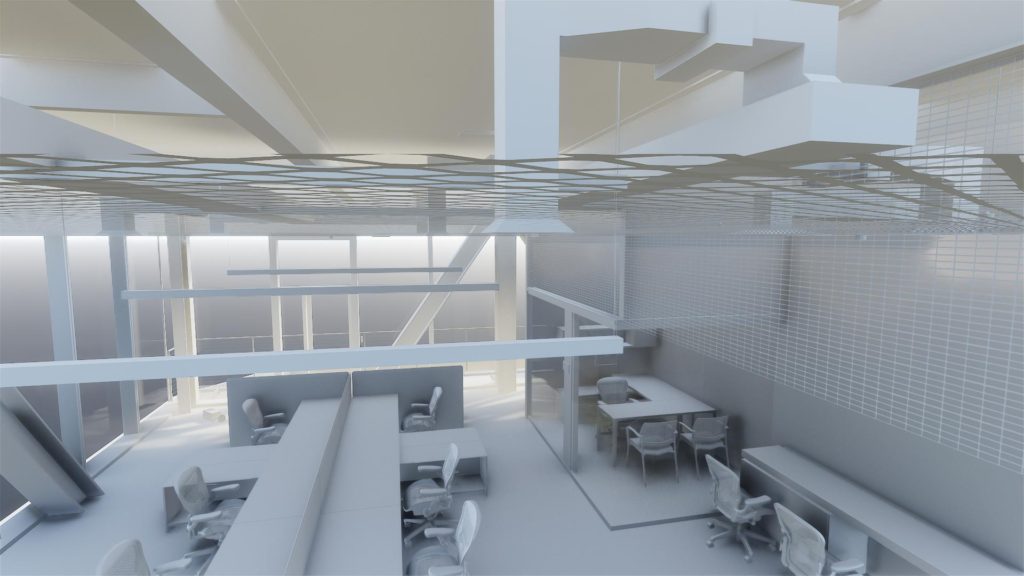 Informing the Design Process: Between Architect and Client

Virtual Reality can also enrich communication with the client similar to how it aids within the design team. As designers, we sometimes forget that not everyone we work with has the same training as we do and everyone has different abilities in translating 2D drawings into a 3D space. By shifting the focus in the drawing process from 2D drawings into 3D modeling, the concept and intent of a particular form and design decision comes alive to everyone. A client can see their space more clearly, and with far fewer explanations of what a design decision will look like. Additionally, virtual models with the aid of VR can help publicize an upcoming facility to potential users, renters, and even project donors. Bialosky Cleveland recently completed a series of donor events for a private school in collaboration with the administration. Our team was able to walk the group through the vision for the space, address the school’s future, and demonstrate how their teaching aspirations would be accomplished in the space. 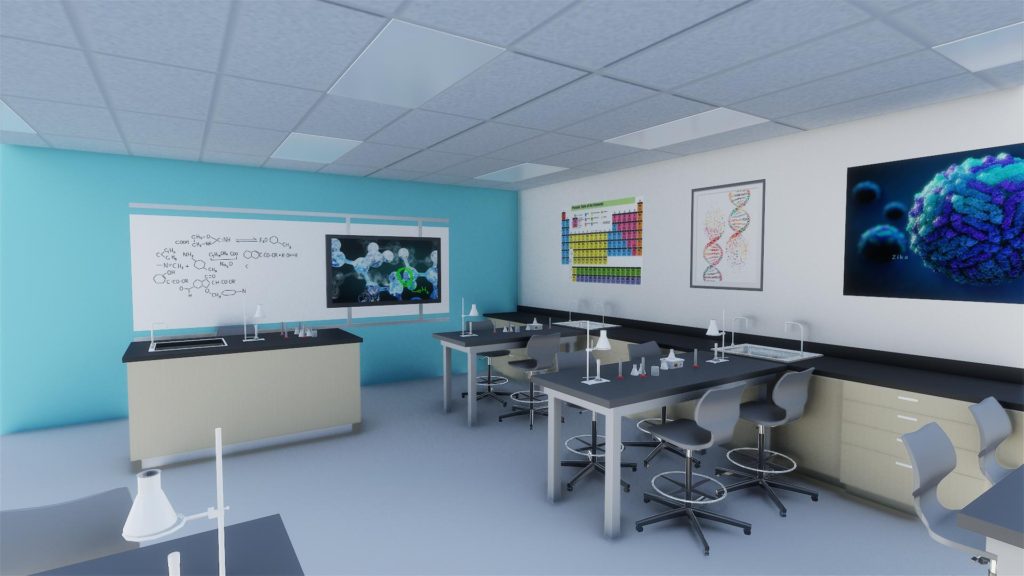 Modeling created specifically for VR can also be useful as a communication tool during construction. A majority of the questions that arise during construction are caused by a miscommunication between team members. The virtual model allows for the designer to quickly export views to assist in clarifying or solving a given issue. This allows for timely responses to field questions and expedited, accurate solutions to keep projects on budget and on schedule. 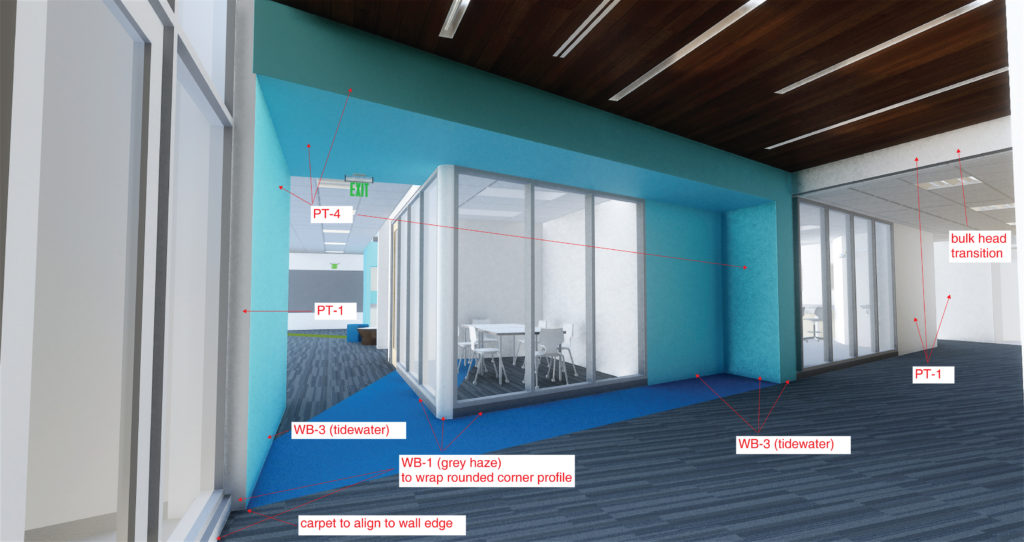 Not Just for Work, but for Fun

Virtual Reality can certainly enhance the workflow and outcome of the design process, but it also can be a fun team activity for staff.  We hosted a game night in mid-September for employees and their families to play diverse games together. Everything from a typical game night was there: card games, board games, console games, Oculus Rift games, and even pizza and soda for fuel. The Oculus was a big hit for every age group and let staff and family alike to gather, play, and experience this new technology together.