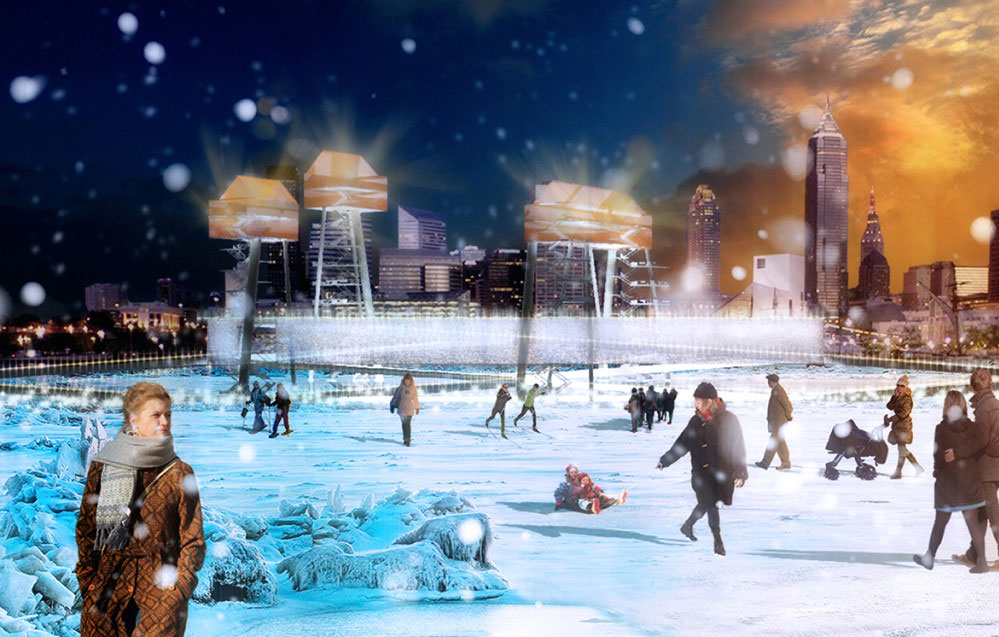 "COLDSCAPES: New Visions for Cold Weather Cities" is a multi-disciplinary design competition that encourages artists, architects, landscape architects, and urban designers to explore the exciting and untapped potential of cold climate cities. The competition is organized by Kent State University's Cleveland Urban Design Collaborative (CUDC). Over 80 registrants participated in the 2013 COLDSCAPES Competition in its inaugural year, with submissions received from 15 U.S. cities and 13 countries spanning a wide range of cold (and warm) weather climates. PROJECT NARRATIVE GLOW ignites new poetic relationships between lake, city, and the rhythm of the seasons. A seasonal relic, GLOW engages the Lake Erie break wall, mediating the domestic (city side) and wild (north of the break-wall) sides of the lake, creating an infrastructure for cultures to develop that leverage the latency of water as public space – in both solid and liquid states. GLOW activates this linear infrastructure creating new experiences of the lake all year. Ramps bring users to an elevated deck that allows one to view and be viewed. The structures skin is inspired by the break-wall’s texture that becomes coated each winter by the crashing waves of Lake Erie. Inhabitable house-like (GLOW)bes hover still higher, creating an otherworldly, ethereal experience. The break-wall is a segmented lily-pad network by summer. In winter, when the lake freezes, the system becomes whole. This encourages engagement with the lake through skiing, snowshoeing, sledding, hiking, etc., to transverse the path and create their own way to engage with GLOW. An open canvas, GLOW is activated by each season uniquely, encouraging new cultures and economies in a non-prescriptive manner, providing the elements to awaken latent uses of one of our most important resources– water. Inside a SNOW(GLOW)BE on Lake Erie.

Bialosky + Partners Architects' submission GLOW, which proposed building captivating structures on Lake Erie, received one of ten Honorable Mentions. The three winning entries and ten honorable mentions were selected by a jury comprised of leaders in a range of design fields, including architecture, landscape architecture, urban planning and public art. These entries will be on exhibit in Cleveland in November 2013, and published in Volume 6 of the Cleveland Urban Design Collaborative’s Urban Infill journal series, focused on advancing the design of urban environments for winter weather. Leaders of the GLOW submission included David Craun, Hallie DelVillan, Theodore Ferringer, and Michael Abrahamson (University of Michigan Taubman College of Architecture; pre-PhD program, History/Theory of Architecture), and would not be possible without the hard work of Nathanael Dunn, Dave Berlekamp, Nick Dilisio, Andrew Vichosky, and Zach Anderson (Kent State University CAED). The engagement of GLOW with the lake's break-wall to create an iconic network that connects City and Lake.